I had an entirely different post ready to go for today but something was tugging at me to write about depression and Robin Williams instead. Depression is no stranger in my life or on this blog and writing has been a form of therapy for me all along. I just hope everything comes out right.

I first found out that Robin Williams had passed away as I was scrolling through my Facebook feed yesterday evening. After seeing that initial post, I started scrolling quickly and could not believe what I was seeing. Did he really die? This has to be a joke.

The more articles and photos I’d see with his name in them, the faster I’d scroll. Is this for real?? When celebrities pass away it doesn’t really have a profound impact on me because I don’t really know them but with Robin Williams, I think there are two things that made his passing a bit different for me.

The first being that it feels like a part of my childhood is gone. I grew up watching his movies. I first saw Mrs. Doubtfire in the theater and have seen it dozens of times since then. I watched others too but that one really sticks out to me. Probably because I have memories of watching it with my family over and over again. I love him in Aladdin too.

The second reason being that he struggled with anxiety, depression and addiction. I hadn’t realized that until recently when sightings of him started popping up in Minnesota (where I live) because he had entered a treatment facility just last month. Him passing away was the furthest thing from my mind. I was happy that he was getting the help he was needing.

When I had heard that he likely committed suicide I was stunned.

It’s crazy to think how somebody who makes people laugh and who was clearly a great friend to many, could feel so lonely inside – to the point of ending their life. But I get it. Regardless of what is going on around them, they could be the most amazing person on earth, but it doesn’t appear that way to them. They are unable to see that.

Depression completely screws with your brain. Everything becomes distorted and you pretty much feel like you’re losing your mind. It’s scary. It’s lonely.

It’s all in the mind.

Treatment is not the same for everyone.

It has varying degrees of severity.

Being sad and being depressed are NOT equal. They are NOT the same.

Some have life-long battles with it.

Some battles are shorter-lived.

Some are genetically predisposed to it.

Some experience depression after a traumatic event.

Sometimes it’s a mixture of being genetically predisposed and experiencing a traumatic event (that’s me).

*Note: These are not technical “symptoms”. These are my own words based on my personal experience. If you think you or someone you know may be depressed, please see a list of depression symptoms here available on the Mayo Clinic website.

For those who say talk to someone…

I agree that this is great advice. The problem is, not everyone listens. And I mean really listen. Some people listen.

Some people go run and tell others (gossip). Some just judge and do nothing. Some make fun of people for it. Some don’t believe what they’re hearing. It’s because they aren’t really listening.

I know this firsthand.

Here’s some advice to go along with that…

If someone is talking to you… listen. Wouldn’t you want to be heard if you were struggling? If they trust you enough to talk to you about something they’re struggling with, respect them and their privacy. Don’t be anxious to run and tell the next person you see. If you’re still a child (even a teenager) I would advise you to talk with your parents first if you can. I told my parents LAST (out of fear – it was complicated) and they were the FIRST to help. If not your parents, definitely somebody close to you who you feel like you can trust. I would also suggest a school counselor. I will be the first to tell you that going to close friends or childhood playmates won’t always go as well as you’d like to think it can.

I also know this firsthand.

If you’re an adult, I would urge you to speak to a therapist. It doesn’t mean you’re weak, it means you’re strong enough to put yourself first and get the help you need. If you’re a parent and you think your child may be depressed, talk to them about it. Ask questions. Therapists are wonderful with depression patients, though you do need to find the right one. I’ll be honest. The first therapist I saw was a joke. It felt like they were just going through the motions with me and really not connecting with me at all. This just means you need to keep looking. The second therapist I saw made all the difference. She was amazing. I instantly clicked with her.

Speaking with a therapist is the best thing for somebody who may think they’re depressed because a good therapist will help you with the issues you’re having. They help you work through your depression and can suggest things that will help you personally – we aren’t all the same. 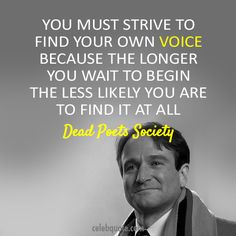 I could write about depression for an eternity (I wrote a book about mine), but I think I’ve said enough for now.

I’m incredibly sad about the loss of Robin Williams. He seemed like a great soul who loved to make people laugh even though he was going through intense internal struggles himself. To me, that is not a selfish act. I hate when people think that suicide is selfish.

As someone who has been suicidal let me just say that you are not thinking about other people and how much they love you. No, you are feeling so terrible inside that you think other people (the world) would be better off without you.

You are feeling like the world doesn’t need you. You feel utterly hopeless and worthless and suicide is seen as a solution to take so that the pain inside STOPS. When you’re suicidal and seriously desperate to DIE, you do not consider the finality of suicide. You just want the fix.

Your hunger for your pain to stop is greater than your desire to live.

My heart goes out to his family and friends. The life of Robin Williams is a tremendous loss and I know there are people all over the world mourning his death today. I think it’s also important to remember his life and how he loved to make other people laugh.

My hope is that he has been able to find internal peace.

I am sad that he could not find it on earth.